Ari Norris, artist in residence at Main Street Arts, during the month of July 2018, is working in one of our two studio spaces on our second floor. We asked Ari some questions about his work and studio practice:

Q:Tell us about your background.
I’m the son of two art educators, from Muskegon, Michigan. I grew up watching both of my parent’s studio practices and helping along  when I could; it made the decision to pursue a career in art an easier choice than I’m sure a lot of other kids had it. We joke now that I was really just doomed from the beginning.

More recently, I apprenticed with Gary Casteel for two summers (2016, 2017) in Gettysburg, Pennsylvania; learning how to sculpt figuratively with oil clay, equally picking up the trade of commission-based bronze. Thankfully resulting in some public work of my own.

Coming up in a few months, we will be dedicating a life-size bronze sculpture of Clarence Zylman, a fellow Muskegonite, in November 2018, in Muskegon, MI.

Zylman was given the title of the “Boogie Woogie Bugle Boy,” by the U.S. Army, during his service in World War II. The song had already been released by the time of Zylman’s enlistment, though he inevitably lived the role that the hit song had immortalized, and the Army publicly recognized him for that.

I am currently in the summer before my final year at Northern Illinois University, finishing up a BFA degree. Jose Jimenez, a fellow sculpture student, and I, run an independent space on campus named Backspace Gallery. I’ve lucked out and gotten great campus employment as well, at both the Jack Olson Gallery here, and the NIU Art Museum.

Q: How would you describe your work?
The current body of work I’ve been building at NIU has partly stemmed from an area artist’s interview I had read; never before had I been hit with such an ego in writing before, and it helped realize some similarities I saw growing in myself.

It really encouraged me to try and deflate this prevalent machismo attitude, that I’m sure all of us can imagine in some iteration. The artist’s work that I was responding to was very much about “man’s work”/construction, so adopting similar materials and language was the starting point. The first pieces utilized realistically rendered, impotently sagging, cast resin hammers that I made.

Q: What is your process for creating a work of art?
Lately, trying to find my own balance between technology and tradition has been changing my process immensely. While I have been finding ways to incorporate digital fabrication, dually burying the technological aspects by hand-skills has been changing the ways I make anything now.

I am constantly battling myself when questioning, “does one approach visibly outweigh the other?” Because for whatever reason, I have this pre-conceived idea that using new technology feels like I’m cheating in some way – and that’s one way I think the work thankfully combats my own ego.

I want my work to stay informed dually by current topics, and art history, without hitting the viewer over the head with either sources, for lack of a better euphemism. The hammer, and objects in general, have already been long immortalized by Joseph Kosuth,  Magrite, and many others, so it’s not exactly doing anything new on that front.

Finding ways to converse with, and utilize these established and familiar motifs, I think is what part of my overarching motivation in art making could likely be.

Jennifer Mannebach, an artist who recently exhibited at Jack Olson Gallery, and is an NIU Alumni herself, titled a piece, “A Means of Asserting While Also Giving the Slip.” That’s been resonating with me for a few months now, as each new object I work on, is both trying to emulate the source material, but also show the viewer that it is an impersonation.

Q: What are your goals for this residency?
As I mentioned before, I have been working around the clock on the Bugle Boy Sculpture. In the days before I leave Dekalb, IL, for Clifton Springs, NY, the clay figure will be going to a special arts foundry for bronze casting over the next several months, and I will be able to get some short term separation from it. The residency at Main Street Arts is coming at a perfect time, and I am really thankful to have been selected.

During the residency, I will be switching gears from working mostly  three-dimensionally, to focus on printmaking. I’ve been trying to make a connection from embossing as a flat, absent image on paper, to clear epoxy castings of objects, both being so ghost-like.

Q: What is your most useful tool in your studio?
Razor blade/Box cutter; I think I even prefer them over the smaller X-Acto knives. Mike Rea, the sculpture professor here at NIU, has shown me some really precise moves with a blade for framing/woodworking. Using a razor with the resin work I’ve been doing is great too, I’d rather shave flashing down with a blade than try to sand it and breath in all that dust. Cannot beat the replaceability either.

Q: Do you collect artwork?
When it’s reasonably priced, I try to! Since moving here to Dekalb, IL, I’ve been trying to collect work from retired NIU faculty. I think the fact that they are largely pre-internet, the amount of information sellers can find is more limited, so the price can be closer to what a student can afford. Not to mention the thrill of stepping into an area Goodwill or some other thrift store, and finding something with a name that is recognizable, but that’s rare.

Q: What’s next for you?
I have two public sculpture dedications in the months following the residency, and college will be back in full swing as well. During all of this, I will be getting my applications prepared for grad school, and getting ready for the Spring BFA show. Ready to let the chips fall where they may! 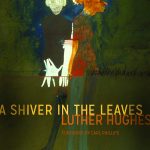 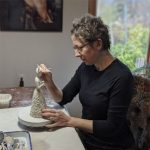 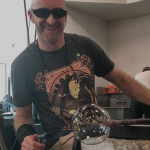 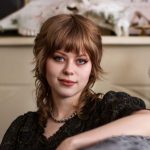