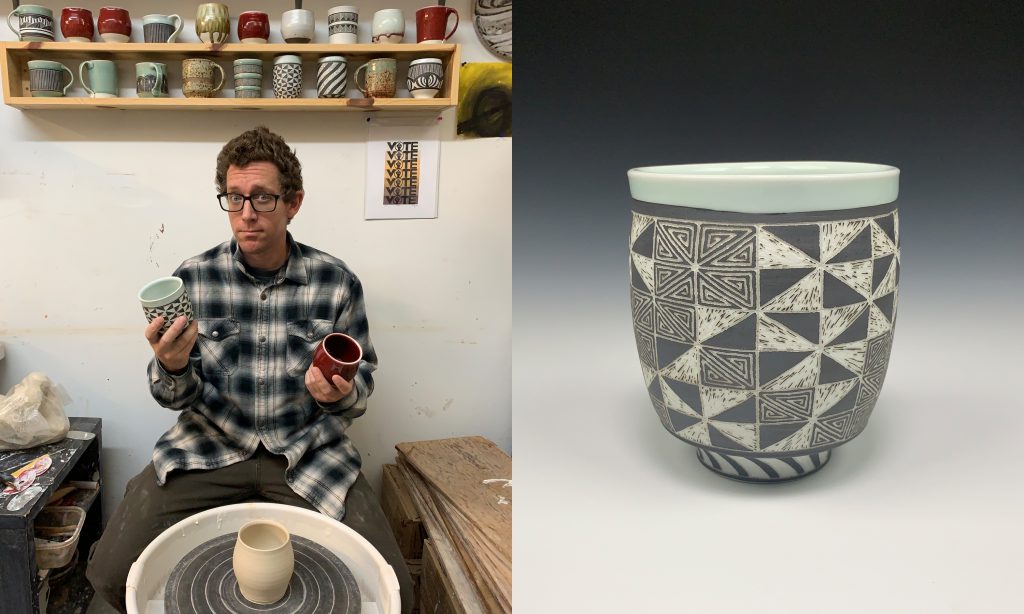 Artist Statement:
“The forms and glazes of my work are influenced by historical ceramics of Japan, China and Korea. The marks I make reflect my interest in 2D art that has a very graphic look similar to woodblock prints or ink drawings. By combining my love of functional pottery and drawing I am investigating how these two ways of expression can become one. My pots represent a search to find balance with pattern, line, form, function and physical touch.”

Bobby Free is a potter who works primarily with porcelain at high fire temperatures.  He was born in Honolulu, Hawaii in 1982.  Free attended Utah State University in Logan, Utah from 2006 – 2010 where he received his Bachelors of Fine Arts degree.  After college he moved to Helena, Montana to be a production thrower at his sister’s ceramic business, Free Ceramics, until 2012.  He completed several Artist in Residency programs in Montana including the Clay Studio of Missoula, the Redlodge Clay Center and another at the Sonoma Community Center in Sonoma, California.  In 2013 Free moved to Los Angeles, California and began work as the Studio Manager/Technician for the American Museum of Ceramic Art in Pomona until 2016 when he became a full time, Sr. Laboratory Technician of Ceramics at Saddleback Community College in Mission Viejo, CA, where he still works.

works by this artist available for purchase

Works available by this artist will be accessible here when the exhibition opens on November 1 at 11 a.m. EST